A year and a half or so after going vegan, I met with a friend and she asked, “Are you still vegan?”
And naturally I still was, of course. But it kind of struck me to get such a question because when I made the decision to become vegan, I knew there was no going back. I knew this wasn’t going to be just an experiment; this wasn’t going to be just an “ok, let’s try and see…”

Why am I telling you this is because I come across so many people who tell me that to be vegan needs a lot of willpower or courage and effort and they could never make the change. This makes me realise that what felt like the most natural thing to me, isn’t actually the case for a good number of people.

I started reflecting on this as to why that may be the case. Most people, after becoming aware of the cruel animal industry, just cannot resolve to consuming meat and animal products again. The repulsion is so great that they automatically reject these and try to find substitutions. This is what initially happened to me. I went through a transitioning phase, as I didn’t become vegan overnight. I gradually dropped one thing at a time and allowed myself to find the substitutions I needed. In doing this I realised that I also allowed my body and mind the time to adjust to the change.

One big question people face is “how am I going to manage all this?”. When you first embark on the vegan journey it seems very time consuming and requires a lot of effort. This is true, I won’t deny it. But you know, I enjoyed this phase so much because I had not only embraced a lifestyle change but also embarked on a journey of self-discovery.

“Veganism is more than a lifestyle;
it is one of the many inner quests to self-discovery.”

There are always two sides to the coin. You can say that you are experiencing suffering or discomfort (that is, it is too hard to be vegan) but that does not have to be the case. This experience (of trashing the trash in your mind), you can either decide to suffer that experience or just observe it and not get involved. By not getting involved I mean to let your thoughts about this experience be just like clouds that are passing; a cloud passing above does not affect you. The experience in itself is non qualitative. You have the choice to attach whatever attributes you like to it. So, leave the mind alone and embrace the change you have decided upon. It will be forced to come to terms with itself at some point and when that comes, the mind will then become your greatest assistant.

The Body
Then alongside the mind comes the body. Some people may take a great toll on the body with the change. Initially, they may become sick and feel that this new diet isn’t great after all. The body, just like the mind, also needs it’s time to adapt to the new diet (given that you are eating the right vegan food). It has been used to a different chemistry all this time. The time it takes for your body to adjust and make the necessary changes to accept the new diet may be expressed sometimes as illness and tiredness symptoms. This is merely a phase where the body is cleansing itself from all the ‘not-so-good’ stuffs (toxins) that it’s been receiving; this phase will pass.

Support
Moral support, if you are not getting it, is another factor that comes in when making this lifestyle switch. People around you may be quite discouraging and you may feel disconcerted and unsure.
Moral support helps a lot but what do you do when you do not get it? Where do you turn to?
You could visit forums, groups and meet like-minded people if you can find some close to you. These will provide you with some kind of support but ultimately you will be left to your own self.
Well, allow me to tell you this: your own self is the key. This is where you turn to when you do not get the support around. Infact, even if you do get some support, your own self is what will keep you going strong into this journey.

The Self
What do I mean by turning to your own self? You see, veganism is perceived as fighting for the animals, an act of compassion; all attention is being brought to the outside. But where does this start? It starts from a calling from inside. This is not your mind, it’s not an idea; it is just your very own self.

Let me put it this way. When I first became vegan (in 2007) and people would ask why I’ve made this choice, I would have all the vegan arguments to affirm myself as an avid animal rights fighter and the health benefits of a vegan diet. While this is all the more true, I have come to realise that I am vegan because I can see beauty in this embrace of the lifestyle. There is an element of beauty in having just plants on my plate. I cannot even cultivate the thought of the body of a dead animal on my dinner table. Through the years it has come down to just that; what my utmost inner being finds aesthetically pleasing. This utmost inner being is what I am referring to as your true self, a ‘you’ that just knows, a ‘you’ that is not governed by rules and games of the mind or ideas. Indeed, all the battles that we fight are merely inside and not out there.

Beauty
The thought of this beautifying experience alone, in a way, summons all the energy required to go through the process of embracing veganism. Indeed, an incredible amount of energy resides within ourselves if you pay close attention. Over the years, being vegan has not only helped kindle and feed that energy but in return this energy is what has kept me going. So much that now, it has become effortless for me to be vegan. It will be an effort again not to be!

Some good reads and inspiration:
How to turn vegan
Vegan lifestyle has health and other benefits, but ‘animal-free’ diet presents challenges, too
What is aesthetically pleasing to you?
Previous Post: « Galway! Part 2 (Co. Clare Tour)
Next Post: Easy Vegan Scone Recipe »

Plants have feelings too…
Jill Bolte Taylor’s stroke of insight | Video on TED.com 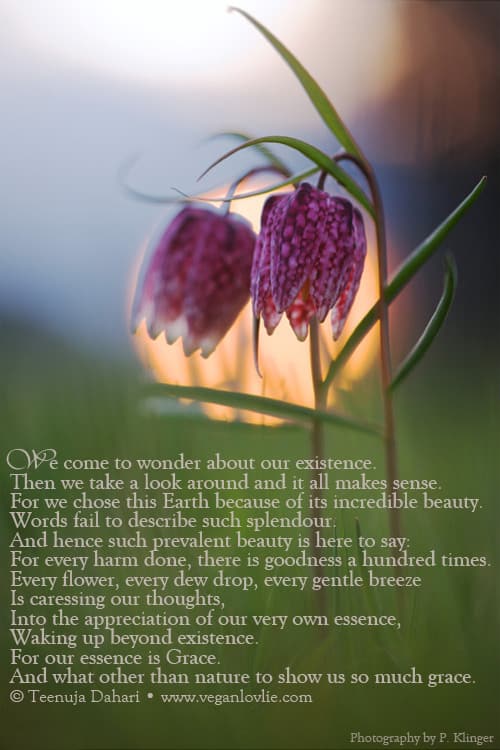 We Come To Wonder…