A vegan Pineapple Pie recipe with no added sugar and homemade flaky pie crust. The texture is somewhat similar to a creamy custard pie but woven with bits of sweet juicy pineapple and chewy dried apricots that add to the deliciousness, bringing in some floral flavours.

At our place, when we think of pie, it almost always means banana pie since it’s our favourite kind of pie, and also because we grew up on banana pie from our home country. Custard pie is our second favourite.

I wonder why it never occured to me, until now, to make pineapple pie; pineapple is much in abundance where I grew up. For sure, it very well could have been a great fruit to use in many dessert treats. The most quintessential pineapple treat from our home country is mouthwatering salad-style pickle, smeared with chilli paste.

With a pineapple that has been sitting in the refrigerator for a few weeks, it had now become far too ripe for eating or even pickling. It had to go in some kind of dessert.

Pineapple upside down cake did cross my mind but, for some reason, a tart sounded far more interesting this time. Besides, I’ve never made pineapple pie before and, as my mind was stirring up the flavour profile, I thought this is certainly something I had to taste for real. And I was not disappointed. This pineapple pie tastes amazing with the most ambrosial aroma!

What’s also noteworthy is the ingredient list which is short and nothing too fancy — fresh pineapple, dried apricots, cardamom or cinnamon, arrowroot powder or cornstarch, coconut milk, and for the pie crust — flour, oil and plant-based milk.

A very ripe pineapple won’t require much additional sweetener. Dried apricots, added to the filling, are simply gorgeous, not only as a natural sweetener but, because their flavour is concentrated when dried, they also add some floral undertones.

I do recommend organic dried apricots if you can get your hands on some. The organic ones usually don’t contain any sulphites and also, they are not treated to retain their orangey colour. Consequently, they are brown and seemingly less attractive, but their taste is exquisite and much sweeter.

The pie crust is made from scratch from my previously featured oil-based shortcrust pastry which is really easy to make and comes together pretty quickly. If you do want to use store-bought pastry dough, you may do so but I find this homemade crust to be a little healthier. I’ve used whole spelt flour for this pineapple pie recipe but you may use all-purpose or pastry flour as is called for in the original shortcrust pastry recipe.

I love weaving lattices to top my pies; I think they just make the pie so pretty. If you don’t fancy making a lattice pattern or are short of time, you may just cover the pie with a layer of pastry with some slits or cut-out shapes. The pie itself is not time consuming to make at all; actual hands-on time is about 30 – 40 minutes.

To make this scrumptious Pineapple Pie:

I am using fresh pineapple, finely minced, including all the juice that puddles on the chopping board. You may use canned pineapple with the juice.

The minced pineapple, along with the juice, is simmered with minced dried apricots and a cinnamon stick or 2 – 3 cardamom pods on medium heat, until the pineapple is tender and the juice has reduced (about 15 – 20 minutes or more, depending on how much juice you have).

At this point, dissolve the arrowroot powder into the coconut milk and water, then add this mixture to the pineapple. Stir to combine and continue to cook until the mixture starts to thicken and is creamy and custardy. Don’t dry up the mixture too much as it will thicken further during the baking time. Remove the pineapple custard from the heat and allow to cool.

While the pineapple is simmering, I use this time to make the crust from scratch based on my previous pie crust recipe.

Line a 28-cm (11-inch) pie mould with the pastry and pierce with a fork all over. This will prevent the crust from bubbling up.

While the pineapple is cooling, pre-bake the crust at 180C / 350F for about 10 minutes. Then remove the crust from the oven and fill with the pineapple custard. The filling doesn’t need to be completely cooled, slightly warm is fine.

To make the lattice top as mine, place 4 strips of dough, parallel to one another and with a little distance in between each, on both extremities of the pie, leaving a larger gap in the centre.

Place the second set of 4 strips of dough, somewhat inclined at about 60 degrees to the previous strips, on opposite extremities again.

Interweave another layer of 4 strips, at a angle, on either extremities. Alternate the strips so that they go over and under the previous set of strips. The next parallel strip goes under and over, and so on.

Don’t try to weave the topmost strips in between the underneath (first) layer of strips, just interlace them with the second layer only, i.e. what you can easily lift and pull back.

I had a bit of leftover dough that I braided and placed around the edge. I also added some flowers, which is just a long flat piece of dough rolled up, and leaves shapes.

You may top the centre with some large coconut flakes. I suggest you add the coconut flakes halfway during the baking process so that they don’t get burned.

Place pineapple (along with its juice) and dried apricot in a saucepan on medium or low-medium heat. Cook for about 20 minutes or so, while stirring occasionally until liquid has dried up and pineapple is tender.

Stir the arrowroot in the coconut milk and water, and add this slurry to the saucepan. Combine to mix and continue to simmer until pineapple mixture starts to thicken. Remove from the heat and set aside to cool.

While pineapple is cooking make the pie crust.

Roll out the dough and place in a 28-cm/11-inch pie baking dish.

Poke the dough with a fork all over and place the dish in the oven to pre-bake for 8 - 10 minutes.

Remove the crust from the oven and fill with the pineapple mixture.

You may either cover the pie entirely with another layer of pastry, go for a lattice decoration or cut out some dough shapes and decorate the border, then top with coconut flakes in the centre.

The pie will keep refrigerated for 2 - 3 days. You may reheat in the oven before serving.

﻿Did you make this recipe? Mention @veganlovlie or tag #veganlovlie.

I've used my Oil-based Vegan Shortcrust Pastry recipe (https://veganlovlie.com/oil-based-vegan-shortcrust-pastry/) and substituted the all-purpose/plain flour for whole spelt flour, hence the brown colour on the crust. You may need to adjust the oil or aquafaba/plant-based milk slightly, depending on what type of flour you use.

Love this Pineapple Pie recipe? Pin it for later. 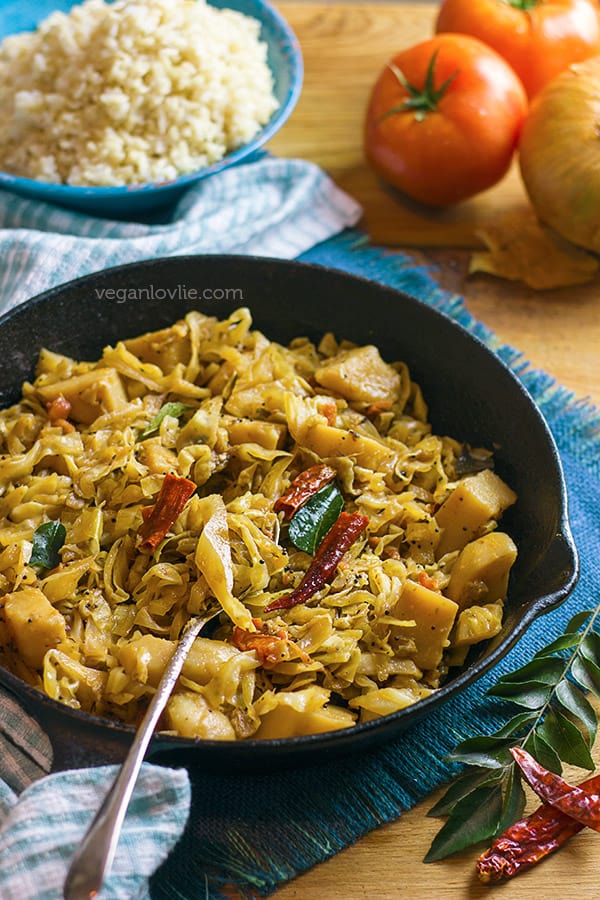 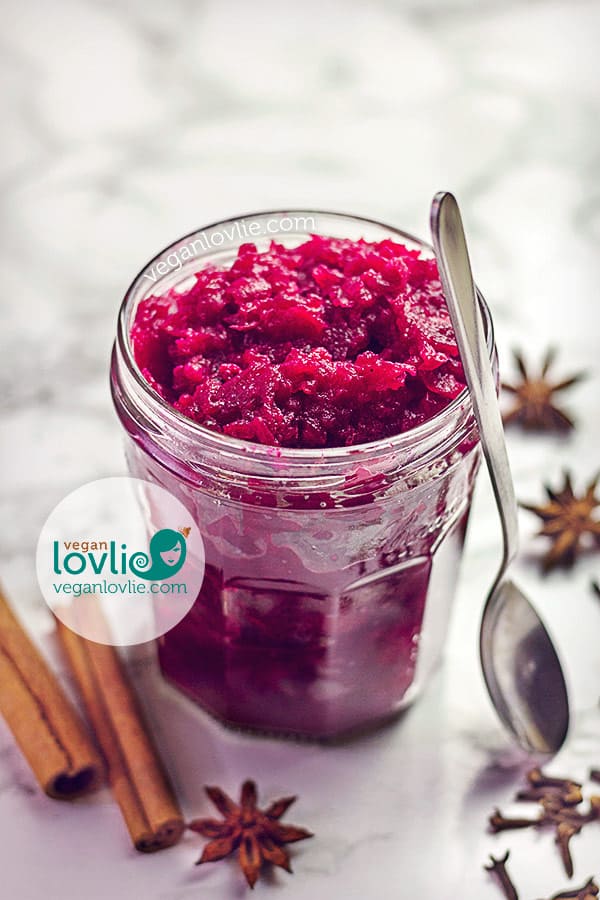 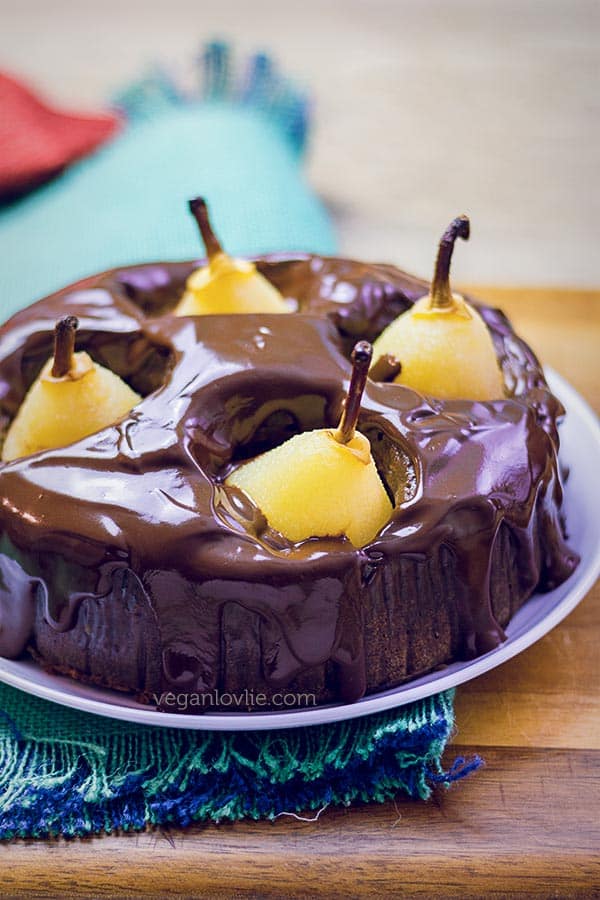 error: If you would like to print the recipe, please do so from the printable recipe card below.